skip to main | skip to sidebar

Well, this week found us in-patient at Children's Hospital for the first time in almost 2 years. We were there for 4 days, and we came home last evening. This time, however, it wasn't heart related. It was poop related. (Fair warning: if you don't want to know more about poopy issues, quit reading now while you're ahead.)

Gabby has always tended towards constipation. She's been on MiraLax for a long time. However, over the past couple of months, she's tended to have a bigger belly than usual. What was happening was she had an old partial poop plug in there, and liquid poop was going around it. I've had her to the doctor more than once for this problem. Each time we'd up her medication or add something new. We recently added enemas to what we were doing as needed.

This last Sun. night, I gave her an enema because what we were getting was more liquid with flakes in it. I'd been getting darker liquid with pieces in it. (Leave it to a nurse to actually look at what's in the Pull-Up!) She really resisted, but with the help of a friend, we got it done. A little while afterward, Gabby started really hurting. She was in so much pain, she was lying on the kitchen floor with an ice pack on her tummy crying. I called the doctor's office, and they told me to take her to the ER. So . . . after my friend got here, off to Children's we went.

They did an abdominal x-ray, and they examined her. She was really distended and uncomfortable. I gave them the whole history & answered their questions. They decided to admit her for a "GoLytely clean-out." This entails putting an NG tube through her nose and into her stomach and giving her GoLytely through that. GoLytely is like super strength MiraLax, and it's what you have to drink before having intestinal surgery or a colonoscopy. She needed so much that there was no way she could drink it all. They also gave her enemas on top of it. Plus she got IV fluids since she had absolutely no appetite during all of this.

In the end, she got something like 2 1/4 gallons of the stuff pumped into her and a total of 3 enemas. For a couple of days of her hospitalization, we were having problems with vomiting as well. They'd turn off the GoLytely for awhile until her stomach settled down. It also meant that it was hard for her to start eating again. They wouldn't let her go until she could keep clear fluids and soft foods down.

So here we are the afternoon after discharge. She has an appetite again. She's active. Her tummy is softer than it's been in some while. She seems happier and more comfortable. (Wouldn't you be?) Yes, I'll make it a point to get more fiber in her diet and get her medications into her, which she's pretty good at taking. She has a visit with a specialty clinic in about 10 days for regular follow-up and a follow-up visit at her pediatrician's office on Monday. Also on Monday, she has her annual check-up with her cardiologist. Watch for visit results here.

Many thanks to my friend, Lisa, who minded Sarah through all of this. She's the one who helped give Gabby the enemas when I asked, and when we had to go to the hospital, she was right here and made sure Sarah was cared for while I was with Gabby. She also made sure Sarah made it to the hospital every day to see us. I couldn't have done it without her help.
Posted by Linda at 3:24 PM No comments: 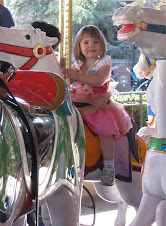 This is a blog about having a child with a congenital heart defect called tetralogy of Fallot. This will be a good place to go to keep up to date about any doctor appointments that Gabby may have (much fewer than they've been in the past), and to hear about all of the fun day-to-day stuff that happens in between.

Check out the memorial blog about my late husband (and Sarah & Gabby's dad) at http://jackdarkhand.blogspot.com/